Protecting Your Puppy: What We Vaccinate For and Why

Home » Protecting Your Puppy: What We Vaccinate For and Why 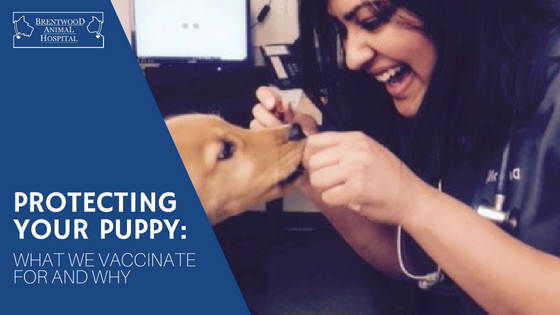 Many serious diseases can be prevented with vaccinations. With nearly 90 million pet
dogs in the United States, your pet is likely to come in contact with an infectious disease
at some point in their life. Even if your pet is indoors, your dog can be exposed to
viruses carried in the air, in dust, or on clothing. Vaccination is a safe and inexpensive
protection against costly, and in some cases, deadly diseases. Our hospital follows the recommendations of the American Animal Hospital Association for general guidelines, but also works with you to customize your pet’s vaccination program based on their age, breed and lifestyle!

Here are the diseases our general vaccination protocols will protect your dog against:

DISTEMPER
Canine distemper is a very contagious and deadly disease caused by a virus. Dogs and
ferrets as well as certain species of wildlife, such as raccoons, wolves, foxes, and
skunks, are at risk. Although there is no cure for distemper, the most important fact to
remember is that it is preventable through vaccination. For dogs that have developed
clinical signs of distemper, the prognosis is very guarded depending on the immune
response and severity of symptoms. Dogs that develop neurological signs are the least
likely to recover.
While dogs of all ages can become infected with canine distemper virus, puppies—
especially those with poor immune systems or those that are unvaccinated or not
completely vaccinated—are at the greatest risk for this nasty virus, which is spread
through the air or by direct contact. It invades the tonsils and lymph nodes first, and
then spreads to the respiratory, urinary, digestive, and nervous systems.

PARVOVIRUS
Canine parvovirus (CPV) is a nasty, highly contagious illness, spread from dog to dog
by direct or indirect contact with feces. That means that your dog can get CPV from
either eating an infected dog’s poop or simply sniffing an infected dog’s hindquarters! It
can be especially hard on puppies who haven’t yet been vaccinated because their
immune systems haven’t yet fully developed.
CPV shows up in two forms: intestinal and, more rarely, cardiac. Symptoms of the
intestinal form of CPV include:
 Extreme vomiting
 Severe diarrhea, often containing mucus or blood
 Anorexia
 Lethargy
 High fever or, sometimes, a low body temperature (hypothermia)
 Severe abdominal pain

Because the intestinal form of CPV results in fluid losses and because the affected
intestines do not absorb nutrients and proteins properly, he’ll weaken, lose weight and
become dehydrated pretty quickly.
The cardiac form of CPV tends to attack very young puppies, causing cardiovascular
and respiratory failure and, unfortunately, often leads to death.

LEPTOSPIROSIS
Leptospirosis is an infectious disease that can affect many animals including wildlife,
rodents, dogs and people. The disease is caused not just by one specific strain
of Leptospira spp. but rather by any of a number of different serovars (types) within
this bacterial genus. They exist everywhere in the world but are most commonly
prevalent during periods of heavy rainfall.
Your dog can contract the organism through direct contact with another infected animal,
by eating infected meat or most commonly through contact with anything that has been
contaminated by the urine of an infected animal. Most infections occur when dogs go
swimming in and/or drink infected water, but in reality most anything (plants, dirt, objects
or water) can be a potential source of infection.

RABIES
Always fatal, rabies is a viral infection that affects your pet’s brain and central nervous
system (CNS). Primarily spread through the bite of infected animals such as foxes,
raccoons, bats, and skunks, rabies is a zoonotic infection that can affect all mammals,
meaning it can be transmitted to humans. For this reason, rabies vaccination is required
by law for all dogs and cats.

BORDETELLA (KENNEL COUGH)
Kennel cough, or tracheobronchitis, is an infectious bronchitis that could be compared
to a cold with a scratchy throat in people. The most common symptom of canine kennel
cough is a harsh, hacking cough that sounds as if something is stuck in your dog’s
throat.
This annoying cough is most commonly caused by highly contagious bacteria; in other
cases, the cause can be viral. Dogs in highly populated situations such as boarding
facilities, doggy day care, and dog parks are most likely to get kennel cough, which can
be transmitted by air or by contact with infected surfaces. Puppies and younger dogs
are at the greatest risk, but older dogs can also become infected.

INFLUENZA
Also known as canine influenza, the dog flu is cause by a particular strain of the
influenza virus that can be passed very easily between dogs. Luckily, even though it’s
similar to the flu in humans, it isn’t zoonotic, meaning it can’t be transmitted from pet to
parent. It’s important to note while canine influenza can stand alone, it is often involved
with other infections that combine to cause what’s known as “kennel cough.” While
there have been outbreaks of pure canine influenza virus throughout the world and in the Midwest, it has
only recently been identified. We recommend vaccinating for this if your dog travels to the groomer, day care or boarding facilities.

Vet Services
We provide a wide variety of veterinary services to assist you and your pet. Learn more about the services we offer and how we're different.

Pet Health Library
We share the same goal – ensuring your animal companion is healthy and happy!